wwf oasis of orti and bottagone

This reserve has an area of about 92 hectares, and is run by the WWF, but only in part is the same. The oasis was established in 1991 as principal objective the "Little oasis", namely the study of migratory routes through the practice dell'inanellamento. What is not is that the application of the zampina volatile, a metal ring with the code of downtown ringing in which they were reported for the first time. These migratory birds, moving with routes ranging from north to south, have been spotted up in the middle Africa come from where many of their reporting sighting. This work is very important for researchers, provides an opportunity to know the precise routes that follow when birds migrate south. The area where the reserve lies, once the Etruscans also known for its fertility, was formed in relatively recent times, when the power of the sea has weakened and sediments of the river Cornia gave life to the plain that extends from Campiglia Marittima Piombino.Terreno a little healthy for its marshes were drained in 1830, unfortunately these changes to the territory have changed the very ecosystem that was installed. The park is located near Piombino consists of two coastal marshes, the first to Orti kind of salty, while the second freshwater located in the Bottagone. The latter has formed a flora from marsh reeds, rushes acute, orchids and buttercups water marsh, brackish marsh is composed mainly d salicornia and alimione. Regarding this wildlife reserves have no fewer than 203 species of birds, among which we should remember the Flamingo pink, three types of Airone, Chiurlo more, Falco pilgrim, Pittima real, two types of Owl, and the Rondini Gheppio. Many are also mammals such as Donnole, Volpi and Ricci also can find Turtles marsh and several types of fish such as carp el'Anguilla. The structures inside the park, are different and some are accessible to all; there are natural trails, paths visits, two huts observers, a roof, a station ringing birds and a path for the disabled. The reserve is open from September 1 to March 31 every Sunday and includes two hours visiting the first at 09:30 and the second at 14:00, also park in the period from April 1 until May 31 includes a third visit 16:30 am, reservations are required. On Tuesday is dedicated to school trips. 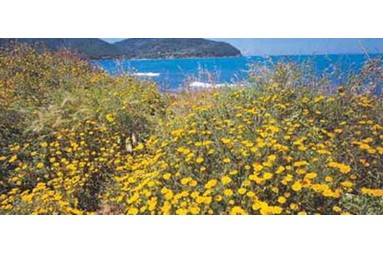